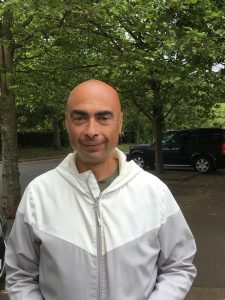 It’s difficult to do justice to all Kevin has achieved within a single-page story.   Kevin is a familiar face to many local walkers, runners and cyclists in South Liverpool, who he passes on his daily power walks.   At 51, not only has Kevin lost almost half of his body weight and reversed his diabetes, but through his friendly and encouraging nature he has already inspired many other people to lead healthier lives.

Back in 2008, Kevin was 25 stone, and living a life that evolved around eating, drinking beer and moving very little.   In the years before, Kevin had been through difficult personal times and was suffering with anxiety and depression.  Working 12-hour shifts then DJ-ing at night, he slipped into a lifestyle fuelled with pizzas, beers and lazy afternoons on the couch.

Kevin described how he used to look in the mirror and feel ashamed, and received hurtful taunts from teenagers about his size (’Do you know what you wanna do mate?  You wanna breathe in, it’ll make you look good’).

Kevin recalled his feelings of hurt at hearing these remarks and how this instigated a desire to change.

“That’s when I realised, I need to change. This was a 14-year old school girl, it really hurt me…it was horrible”.

In 2008, Kevin was diagnosed with Type 2 diabetes, and when he ended up in hospital this gave him a major wake-up call.   He was told his condition could be life-threatening if he didn’t start living more healthily.  This was tough to hear, and Kevin said to himself “You’ve got to get up and do this.  You’ve got to get up and become a different man to who you are now”.

He threw out all the high fat, high sugar foods – which wasn’t easy to do – and he started walking.   He started with a 45-minute walk, then he would add extra minutes each day.   Walking was tough at first and Kevin described how he used to feel out of breath and felt conscious that people were judging him.

“It was getting out there amongst people who were already fit…I was walking around the park and I was looking at my belly wobbling, looking at my “moobs”, and my confidence was going…it was like ‘these people are looking at me and they can see I need to do this’”.

As his confidence dropped he considered doing other things like sit-ups at home, but that didn’t feel the same as being active outdoors.

To regain his confidence Kevin changed how he looked at things.

He took himself out again, and instead of assuming others were judging him, if he saw an athletic person he thought “I can do what he’s doing” or “I can look like her”.  This positive self-talk helped him feel more confident, and Kevin found the more he looked at others walking faster the more this inspired him to go faster himself.  And when he got home, he felt motivated to go out again the next day.   He soon realized that those people he thought were judging him, were actually not.  People were smiling, encouraging and wanted to support what he was doing.    And Kevin realized that breathlessness he’d been feeling in the early days wasn’t purely physical, it was anxiety about others looking at him.

Not only did Kevin’s weight begin to drop off, but he was beginning to notice how good the walking was making him feel.

“Every time I went for the blood test [with the doctor], he said my weight was getting lower, my cholesterol was coming down…I started feeling better in myself cos [the walking] helped me with my mental health…that made me more calm in myself”

Meeting Kevin now, you would not have a clue of his past life.  Kevin’s weight is stable at 13 stone, he has reversed his diabetes, and he walks several miles every day.   Kevin took his walking to another level during lockdown, and did 100 laps of Sefton Park to raise £1040 for the NHS, which was covered in Liverpool Echo.

And his remarkable story doesn’t stop there.

Since turning his life around, Kevin has inspired numerous other people to do the same.

After writing an encouraging comment for someone on Facebook in 2016 (in which he mentioned his own lifestyle change), Kevin was contacted for a feature in the Liverpool Echo.  Since then he has been asked by people across Merseyside how he lost the weight and if they can train with him, and he has helped others lose stones as a result.  Even last week someone stopped him to say how much reading his story inspired them to get active.

And if Kevin can help you, he will.   Whenever he sees someone out walking who looks like they’re experiencing the discomfort he used to, he’ll approach them, encourage them and help them feel good about what they’re doing.

Kevin talked about how much movement means to him – it gives him energy, makes him feel good and helps reduce anxiety and stress.  Plus movement has helped him learn from his past mistakes and become a better person, explaining how he “can now look in the mirror and be proud, not disappointed”.

And when Kevin has a tough day and doesn’t feel like doing the walking?  He tells himself to do it.  He varies his route to make it more interesting.   He knows how easy it is to slip into old habits, and he knows how much better he’ll feel after walking.

“I’m doing it to keep my weight down, but I also see the benefits that it’s helped my heart health, it’s helped my depression, I am the weight I wanna be so I’m just exercising for the enjoyment of it and to be healthy…it’s about enjoying being outside and moving more”

The power of a simple smile

Kevin talked about how movement has helped him make friends and feel part of the local community.   Walking with Kevin around Sefton Park, people were constantly smiling and shouting ‘hello’, and I could see what a positive impact he has on people’s daily lives.  Our conversation made me reflect on my own desire to help, and acknowledge that I’m sometimes held back by an irrational fear of intruding on people’s space or coming across as patronising.   Kevin reassured me to “smile” and “be friendly”, that’s all you need to make the difference. 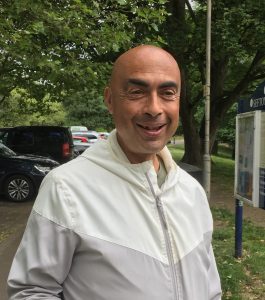 If Kevin’s story resonates with you:

“Get that confidence, go out the front door…take that big step into your new life.  Only you can change your life, only you can make that person a different person”.

Weight loss isn’t easy, but if you commit and you believe, you will achieve beyond what you thought possible.

And whoever you pass when you’re out and about, don’t be afraid to smile and say hello – it might just make both of your days.

If you’d like to chat with Kevin any more about his story, you can contact him via paula@madeuptomove.co.uk

Dr Paula Watson is a HCPC-registered Sport and Exercise Psychologist, Director of Made Up to Move Ltd and Senior Lecturer at Liverpool John Moores University.  Made Up to Move offers affordable psychology services to help people with the mental aspects of exercise and physical activity.

If you’d like support with changing your own health behaviours, please contact Paula for information about the 1-to-1 support available.